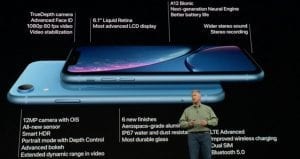 Smartphones were equipped with OLED-displays with a diagonal of 5.8 and 6.5 inches with a resolution of 2436×1125 and 2688×1242 pixels, respectively. The size of Xs remained the same as the iPhone X, and Xs Max is comparable to the iPhone 8 Plus. In addition, the screens have support for the refresh rate of 120 Hertz, like the iPad Pro. In all cases, the front panel will be black. The phones have been protected against water and dust by the IP68 standard.

Smartphones will be available in three colors: black, white and gold. Drive options are also three: 64, 256 and 512 gigabytes. 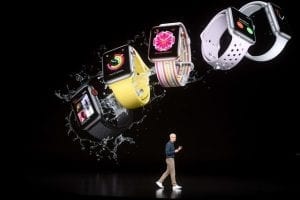 Also during the presentation in California, Apple introduced Apple Watch, which now can take electrocardiogram readings.

As the chief operating officer of Apple Inc Jeff Williams, this is the first smart clock with such functionality.

Smart watches from Apple received a serious update, which concerns not only the appearance, but also the software component. In particular, the screen now occupies the entire area of ​​the front panel of the case, so it is 33% more than in the Series 3.

“It all starts with a stunning new display, we moved the screen straight to the edges and twisted the corners to fit perfectly the Watch shape, the screen was more than 30 percent larger, we did it with minimal body size changes,” said Jeff Williams, Chief Operating Officer of Apple Inc.

According to him, S4 received a powerful new dual-core 64-bit processor and a new graphics processor. Thus, the performance of the gadget has increased approximately two-fold.

The presented Apple Watch Series 4 will come in two sizes: 40 mm and 44 mm. While the last generation had a case size of 38 mm and 42 mm.

Now the clock is able to determine the fact of the fall of its owner, which is important for tracking human health. The clock tracks the pulse and is capable of hammering an alarm if it becomes more frequent without a reason. Also, the clock can count steps, calories, etc.

One of the most important innovations: in the back of the clock and the control head are built electrodes, which allow Apple Watch to do an electrocardiogram.

The presentation was also invited by the representative of the American Association of Cardiologists, Ivor Benjamin, who thanked the company for the innovation that could save the lives of many people. According to him, patients often talk about symptoms that do not appear during the clinic visit, and devices such as the new Apple Watch will solve this problem.

It is also noted that the Food and Drug Administration has approved a new Apple gadget.

The new generation of watches is presented in three colors: gray, silver and golden. The cost of the devices is from $ 399.